Adobe Flash Player 10.1 RC is now available as a prerelease. This version does not require the medialib dependency and should work on its own after installation. You can find it at the Adobe Labs site.

On occasion if you are trying to fdisk or mount a USB disk on Solaris 10 you may get an error that says "Cannot open device." For example: Things to check:

If you have been using the package management system in the newest builds of OpenSolaris (b133+), you may have noticed the naming scheme changes that affect new and existing packages. [Full list of changes]

For example, trying to find the usb header file package is a bit trickier. These files, namely usba.h, usbai.h, and usbdevs.h, are not installed into /usr/include/sys/usb in the default installation. To retrieve them, use this command:

In previous version, these files could have been obtained from either SUNWusbu or SUNWsfwhea. The removal of the SUNW prefix is the most apparent name change for the package collection. Now you can get busy building the latest apcupsd version!

I needed to find a way to get the physical (MAC) address using C. From what I could gather from searching opensolaris.org, there are two methods for retrieving it: libdlpi and arp. libdlpi is the more elegant solution as it requires a simple call to dlpi_get_physaddr(). This is how ifconfig prints your network interface's MAC address. Unfortunately, libdlpi calls are only permitted as root.

As explained by James Carlson:

The second solution is to use arp. In Solaris you can determine the physical address by looking at the arp tables directly (`arp -a | grep <INTERFACE>` or `netstat -p | grep <INTERFACE>`). With C, this can be done by using the if sockets and arp libraries.

I wrote up a solution called "getmac" using both methods. You can gather it here.

Remember to use pfexec for the libdlpi method.

libupnp 1.6.6 is a little tricky to compile on Solaris. After downloading the source from Source Forge, you will want to extract the bzip2 and cd to the libupnp-1.6.6 directory, then do the following. On line 59, there is a bug. Change to The change is adding an extra underscore. Otherwise sockio.h will not be recognized properly and you will get some missing networking variables when you try to build. After that is taken care of...

After the failure of the SATA and USB ports on my Intel D945GCL Atom board, I decided to build out a new file server. Sticking to the Atom theme, I decided to go small and get the CompuLab FIT-PC2. This little toy uses the Z530 1.6Ghz CPU that apparently uses only 6 watts of power. I'm assuming that means *without* a hard drive installed. 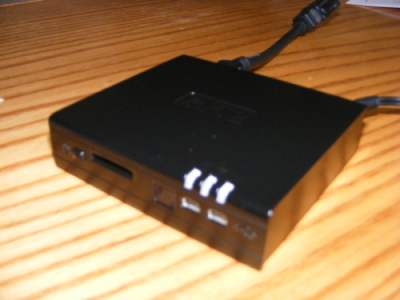 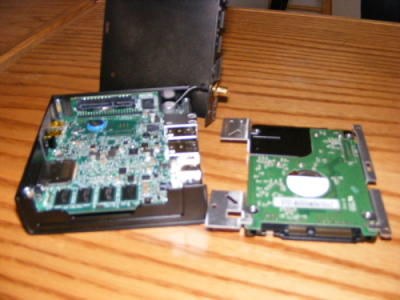 The drive I installed only has 80GB of space. That would run out real quick with my needs, so I decided to get a MediaSonic USB disk enclosure to link up with my server. It can hold up to 4 SATA drives. 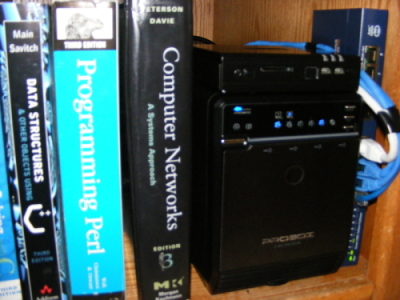 The PC sits on top of the enclosure on my bookshelf taking up 8.5" x 5.0" x 6.5" amount of space. This is not only power efficient, but space efficient since I am using 4 x 1TB drives. 4TB total (theoretical), ~2.6TB in a ZFS raidz. If I were to have purchased the 2TB drives, it would be even better.

Doug's blog on the FIT-PC2 gives a good overview on the features of the device and what works. There is no wifi driver and Xorg doesn't work, so you may want to install OpenSolaris on another machine before installing the internal HDD. My server is headless and uses the built-in gigabit ethernet, so I don't care about those issues.